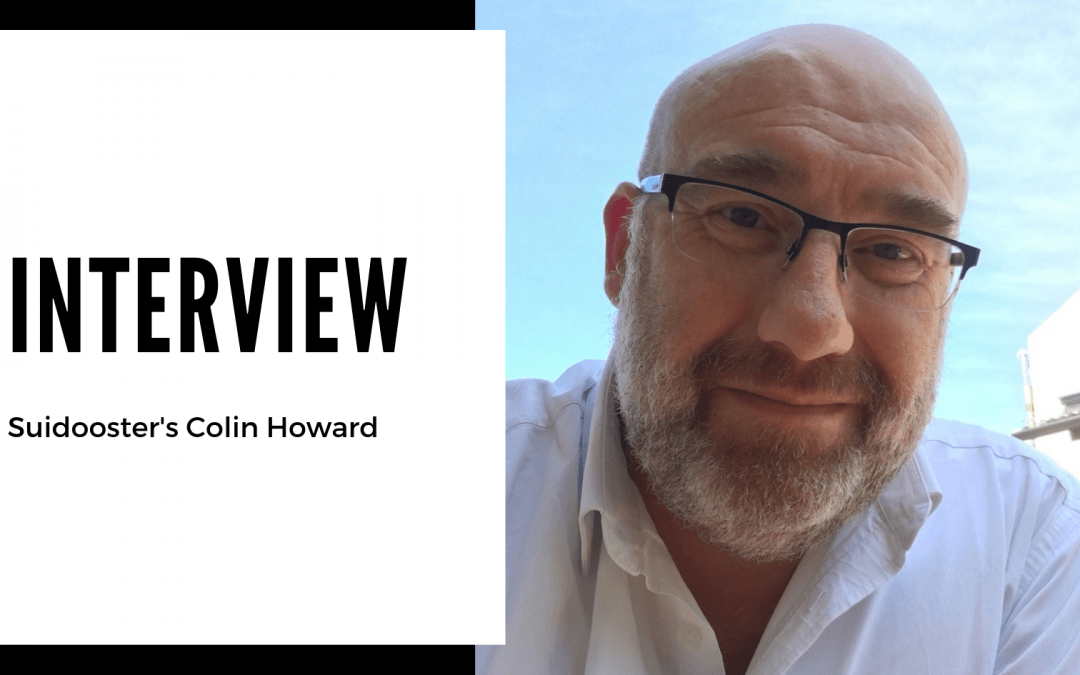 This month we chat to SAFTA award winner, Colin Howard, about what’s it like to be a showrunner for popular Afrikaans TV soapie, Suidooster. Suidooster is currently filming at Atlantic Studios.

How did you first get into the world of film?

My first break was on Egoli, South Africa’s very first daily multi-cam soap. I was a part time Communications Student at the time and Egoli was needing translators. The show was being broadcast in several African countries and all the Afrikaans scenes were re-recorded into English. Pretty  remarkable to think actors had to learn both the English and Afrikaans dialogue for each scene. I came from a small East Rand town and found the world of television tremendously exciting. Fortunately Danie Odendaal and Franz Marx noticed I had an aptitude for script writing and story telling and they mentored me. We would work late hours – often to 11pm at night preparing treatments for dialogue writers, but I loved it. From there I moved my way up to Head of the Script Department and then worked closely with Danie Odendaal developing 7de Laan..

How would you write your own job description for someone who has never heard of a showrunner or knows what you do?

A Showrunner or Producer on a soap is a little different to Executive Producers or Showrunners on a movie. Because a soap needs several directors (we have four), has several storyliners and writers (we have a script team of 15 people), my job is to ensure all those people are talking in the same voice. So I am the central contact point for art and wardrobe departments, directors and writers – guiding the direction we want to take the show. Decisions about day to day look and feel, scene content and storylines are my responsibility. Suidooster is produced by the phenomenal Homebrew Films and Gambit Films. But I am responsible for the day to day operations and decisions, whereas larger decisions about the casting of new characters and long story arcs are made by myself and the whole team of Producers.

I spend a lot of my time with the writing team as this is the back-bone of the soap. We would spend one day a week planning and discussing at length the new block of episodes. We shoot six a week and therefore plan six episodes per week. I will also give final approval of treatments and give final approval of scripts before they are issued. Time will also be spent with the Directors discussing their upcoming episodes and what the vision is for those episodes. I would also brief art department about new set locations or special props and wardrobe and make-up departments about characters  looks. And together with the other producers we view the final assembled episodes. A soap has a fairly relentless schedule of six episodes that need to be recorded each week. So no matter what, six scripts must be approved, six final episodes must be issued…etc etc. My day starts at about eight in the morning and finishes at about eight or nine at night. And weekends help to catch up on some of the reading. Of course time is also spent with actors, discussing their storylines and casting new characters. But despite the hours, there is always something new and exciting happening.

Who are some of the Suidooster characters that you feel you understand the best?

In terms of understanding the characters, we spend a lot of time discussing storylines and scenes. So by the time they reach the screen the writing team and myself are pretty clear about their emotions and motivations of each and every character. I have enjoyed exploring the Samsodien family because I was not overly familiar with Muslim culture and it has been a wonderful learning experience exploring the religion and traditions of Muslims in Cape Town. I love learning about different cultures and religions. It is always interesting to see how cultures differ – but also how there are so many similarities.  And I think viewers have also responded to this. On a personal note I think I am a lot like AB, a little bit stubborn and quite a stickler for tradition.

Can you share one of the most powerful Suidooster moments from the writers room?

I loved the storyline we did with Rhafiek and Carmen falling in love and getting married. Carmen and Rhafiek are such different people – in terms of race, religion and outlook. But we managed to write the storyline in a way that was romantic but also sensitive to Rhafiek’s roots and not forcing Carmen’s character to change. I was very grateful to the Imams who acted as our advisors for their insights and help and of course Irshaad Ally and Desiree Gardner for their amazing acting skills. And the beautiful blended Islamic wedding was beautiful and a first for South Africa.

What TV shows are you most obsessed with now?

I personally enjoy strong character driven human interest drama. “This is Us” is a show that resonated a lot with me. I am also enjoying “Catch 22”, which makes me think of my Oupa who served in the South African Airforce during WW2. I wish I could talk to him now – as a child I knew he was in  the war but I never fully understood what he must have gone through. I would love to hear the stories now that I am more mature. I also loved “The Handmaids Tale.”  “Alles Malan” on Kyknet is also great.

What is something you feel like you’ve learned from another series recently?

I am not sure how to answer this because I am constantly looking at what others are doing and how we can use this in our story telling, albeit in different genres. But I think often producers are looking for gimmicks to set their programmes apart. Which is understandable in the current climate. But at  the end of the day viewers respond to characters they can relate to and identify with. Even if the character is a super hero or an alien, unless we can see ourselves in the character, we will not commit to the story. So never allow a gimmick to overshadow strong character development and  motivation.

Tell us something that no one knows about you

I had an imaginary friend when I was a child. But I still sometimes  talk to him. And he sometimes answers me back with very good advice. I have also watched Coco four times and cried each time.